As strange as it seems, one of the largest American Buddhist Monastery’s is in Batesville, Mississippi called Magnolia Grove Monastery and Meditation Center. Yes- Batesville, MISSIPPI (did you just spell it in your head?!). I know you may need a moment to locate it on a map because it truly is in the middle of rural earth. The Zen Master, Thich Nhat Hanh has three in the United States; New York, California and Mississippi. Thich Nhat Hanh (called Thay) was nominated for a nobel peace prize during the 1960’s when the civil rights movement was at its height. He worked along side Martin Luther King, Jr. to promote peace here, as well as, his home country of Vietnam. Because of his activism, he was exiled from his own country and lives most often in Plum Village, a monastery in France. With the south the heart center of the civil rights movement and continued with racial divisiveness today, it is so fitting for a place of peace to be born there. 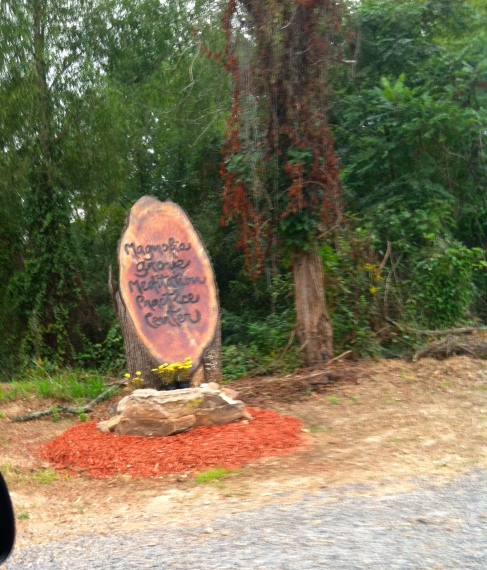 My spouse has been a practitioner of Zen Buddhism for many years and when Thich Nhat Hanh came to the monastery for the first time two years ago, he went for a week long retreat and returned a changed man. My daughter and I joined him for our first Day of Mindfulness and was blown by the silent wind of the monks, nuns and fellow practitioners. More importantly, it was so beautiful to remember how the simple act of centering myself allowed me to wake up my mind from distractions. By creating space to stop and breathe allowed my senses to heighten and experienced such joy and gratitude in re-remembering that my feet are touching the earth. It is so easy to use the television, the computer, the phone to numb out to our life. I believe sometimes we cannot stand to be with ourselves simply because we fear what we may find out. 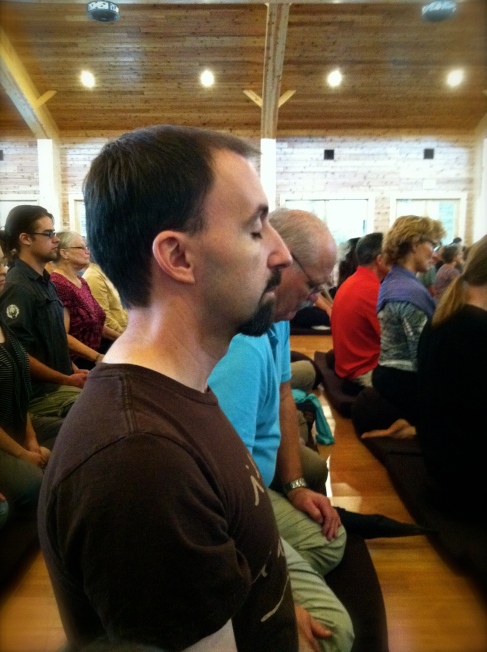 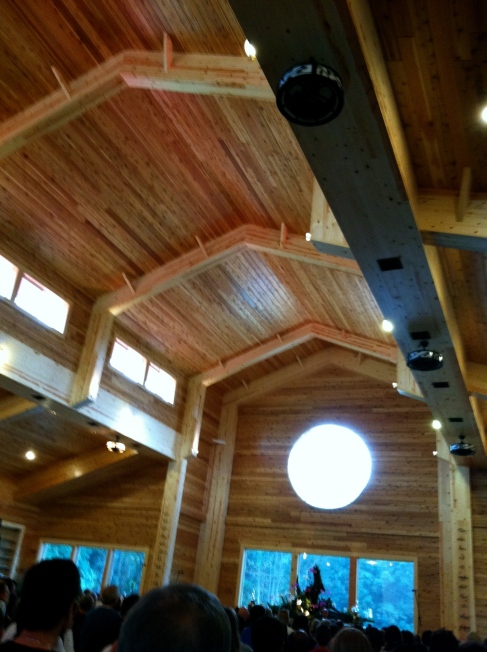 Thay told a wonderful story about how we can use a bell to carve out sacred space at home. He suggested that the use of a bell can allow the entire family to invite each other to sit together and share space………to call us back to our breath, our home that resides within. 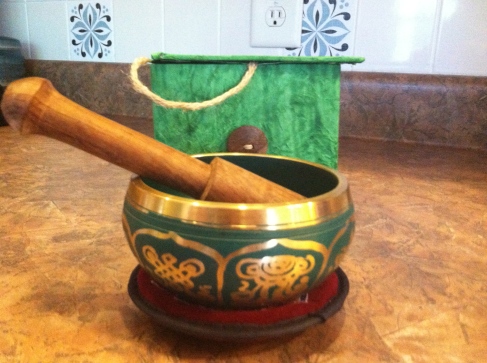 Most days of the retreat lunch was silent, however, on the Day of Mindfulness, we are able to meet people that have come to visit from all over the country. I saw license plates from Virginia to Arizona! We had the pleasure of sitting with a family that lives in Batesville. She told me she works for the local paper, so I asked about the climate of local people in response to the monastery’s presence. She told me that like anything new, people were suspicious and worried there was going to be a sweeping push of conversion. She has continued to report on the monastery through out its progress and although some struggled with fear due to a lack of knowledge, the local Baptist church became involved in building the meditation hall!

What is true of the Buddhists is there would actually be discouragement in leaving your religion of origin. A buddhist practice does not diminish a persons faith, but instead gives us all the opportunity to wake up to our life and grow our relationship within our own religion. A meditation practice calls us home. While I absorbed myself into the meditation hall, I forgot about everything except what was right in front of me. I am taking a step. I am listening. We are one.

A sense of peace washes over me and I want to retreat from the world, maybe live like the monks who spend their lives cultivating peace from within. But I have to remember that I CAN live this way at any time I chose. I can return to my true home within.
Just take a breath. Breathe In. Breathe Out.

Repeat after me this simple prayer as you breathe – I am beloved. I am home.

You ARE Beloved. You ARE Home. 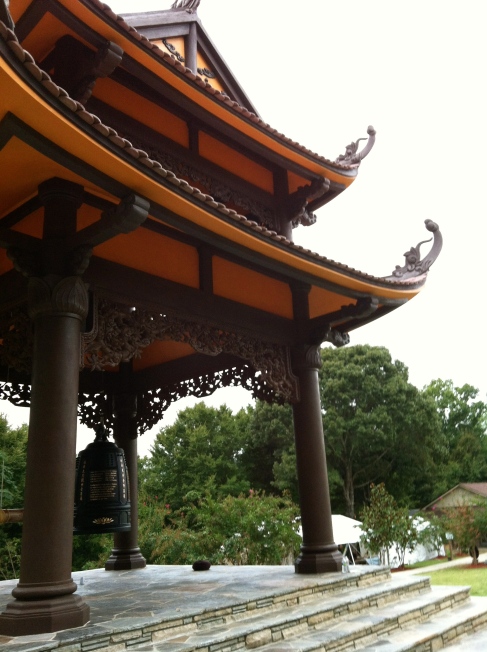 To Learn more about the manifestation of the Magnolia Grove Monastery and this Beloved Community, check out the link below: 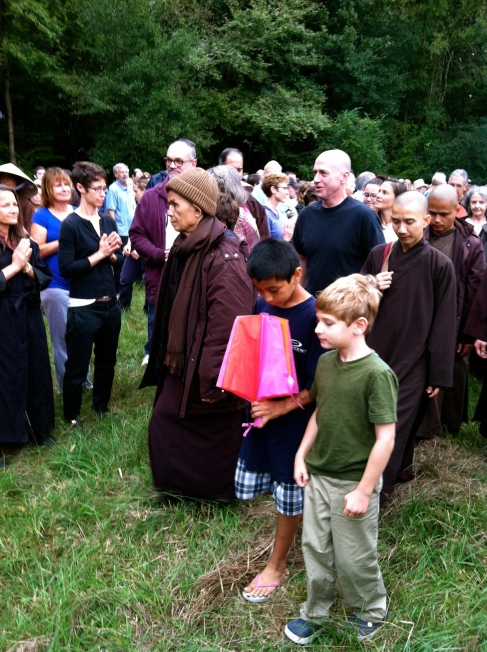 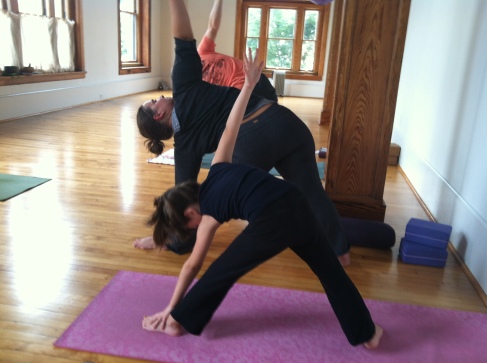 When we are body disconnected, we find ourselves thinking to much and possibly being told we are “in our head” most of the time. As Americans, we fall into the category of extreme body-disconnect. Do you feel clumsy in your body and experience yourself in a way that leaves you feeling awkward and well…disconnected? This lack of mind-body connection is a core struggle that leads to many other life problems that we can experience. A simple ache can grow into an injury as well as the common cold become a major illness. If we view our selves as a whole system, it is imperative that we connect with every aspect; from fingers to toes. Our lack of respect for our bodies can leads us to participate in unmanaged damage that could have life altering effects.

To begin, get out of your head and take a deep breath. Yes, breathe in the deepest breath you have taken today. Some research says that the simple act of holding our breaths, especially during times of stress, deprive our mind and body of the necessary oxygen we need just to slow down, think and be present with ourselves. So, yes, breathe and breathe again…..
Next, Move, but with INTENTION. Sometimes when I am experiencing more body disconnection, I am one bruised up girl. I run into walls and chairs that I swear are jumping out at me, but have not moved from the exact spot I put them in years ago! So moving with intention is key. It is true that you can practice most any kind of movement with intention, being mindful of what and how your body is behaving. For the beginner body connector, or if you are like me and can loose the connection easily, I recommend slow, steady consistent movement that focuses on the breath, such as YOGA.
For many, the idea of trying yoga can be extremely daunting and uncomfortable. The truth is Yoga is for Every-Body. So many myths abound around yoga. Some believe that yoga can only be practiced in the context of a particular religion; while some believe that only the truly fit body can be an avid yogi. The truth about yoga is that it can be practiced by any person regardless of fitness level. Yoga is the type of mind-body practice where you are encouraged to listen carefully to what you need and modify your movements to meet the bodies limits. I have learned this can easily change from day to day. Some days a simple pose like the ‘downward dog’ is easy while other times I can’t wait for the teacher to instruct me to move on to the next pose! Yoga is often seen as a spiritual practice, it is not, however, a practice that purports a particular doctrine or dogma. Instead, yoga suggests that our bodies are sacred and remembering to connect with them in a meaningful way can have so many positive effects. 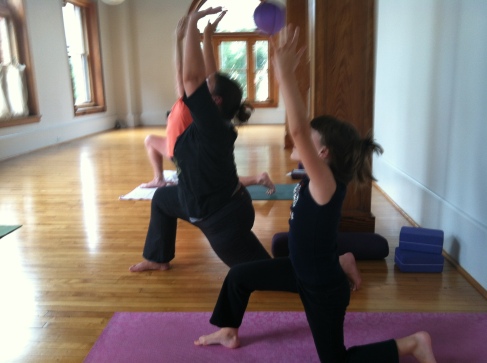 If we return to our four pillars of health: emotional, physical, sexual and spiritual, we are reminded that without these four pillars, we become a lopsided, three legged table. Without finding a meaningful way to connect these four aspects of our health, we are not whole. Yoga can be the glue that allows us to connect to our Whole Selves and offer everyone regardless of our fitness level, spiritual background or fitness history an opportunity to remember the awesome connection we have within ourselves when we simply carve out time to breathe and move with intention.
So, Yes- Take another deep breath. Feel your chest expand as your lungs fill with the happy gladness that only oxygen can provide. Find a Yoga practice that is right for your body and eliminate the disconnect.
Recently, my eight year old daughter went to her very first yoga class after she was told by our pediatrician that she needed to increase her flexibility. Afterwards, I asked her how the experience was for her. She said she really enjoyed it and when asked why, she replied, “I liked that it reminded me that (looking down her toes) my feet are on the ground and I will get better at touching them with my hands.” With that, she wriggled her toes, looked at me and smiled.

Be Well and LiVe OuT LoUd. 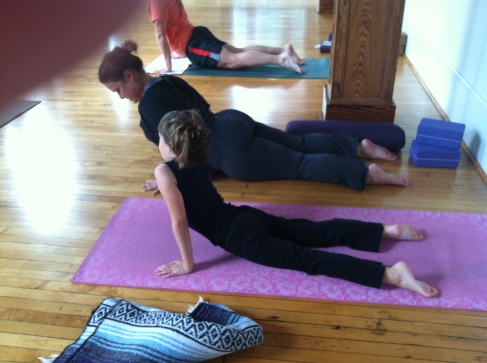