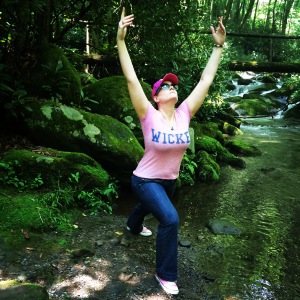 The truth is, show up to yoga and you can set yourself on the path of the Yogi. My own path began some eight years ago when I showed up to my first yoga class with fear written all over my face. I didn’t have a clue as to what I was doing and well, frankly that remains true at times, but now I feel prepared for the next leg of this journey. I believe that becoming a Yogi is much like becoming a Mother or a Therapist. There is no end, but instead simply a journey that gets woven into the path of your life. Some days I feel lighter because of the awareness of how my feet make impressions in the earth. And some days I am acutely aware of how I am stumbling around in the dark……

Six months ago, I began the path of the yoga teacher. It was such a joy to be in the position of student once again. I recall Swami telling us she would rather be in our position and reflected on missing that with her guru. I am still unsure as to how it has changed me, but I am quite sure the process continues to unfold like the thousand lotus petals of the crown chakra. It has been a whirlwind of asana (physical) practice, anatomy, coloring, writing essays, answering questions and practicum. Yoga pop quizzes like get in front of the a class of 3, 5, 8, and then 50 yogis and do this pose sequence, practice this meditation and breath work and remember to breathe yourself! I sometimes just couldn’t help it, but had to make things a little silly to amuse myself and not turn into a wreck of nervousness. Other times, I just made mistakes and was grateful for my teachers to help support me in my growth. We were ‘chick peas in a pot’ of boiling water and we just had to hang tight (although we all readily ran out a few times) until we were ready to sprout wings and fly.

There were many times when I wondered what in hell had I done! I felt so fearful of considering teaching that I resigned myself to just remaining the student. However, the process of learning with Kashi ATL is so balanced and well thought out; I believe they knew when we hit that dark moment and then fed us a little more (with an extra side of confidence) to keep us going. Leaning into the process was at times exhilerating while others utterly petrifying. I would wax between my heart exploding with excitement to share all that I was learning while other moments feeling sure I would get hung up somewhere and forget something, maybe everything and everyone would be hanging out in downward facing dog while I fumbled with my new language.

And just when I was sure I looked like I was just rolling around in yoga hell, in walked words from my people. I remember practicing in front of my first group of eight (that was soooo many at the time) and I was teaching dancer’s pose incorrectly. My teacher was attempting to show me another way saying, “Try it with your hand on the inside of the back foot instead.” I had to clarify that she was trying to tell me I was doing it wrong because I could easily interpret it as a suggestion. In a very small class room, I then mistakenly jutted my arm into someone else’s space/face and we laughed about it while I gently pushed her over and said, “Okay, don’t do that when you’re the teacher!” More amusement and giggles. After class, my fellow yogi (the one whom I had pushed) said how much she loved the ease and confidence I held in the space of teacher and how much she appreciated from me. I GLOWED. I thought it was my worst moment but instead there were the little lights of yogis shining with me.

And I could just go on and on about the people! My fellow yogis in the cooker were the thing that kept me going, sometimes more than myself. This phenomonal group would astound any human. From a neuroscientist, executives, coaches, entrepeneurs, college and grad students, recruiters, attorneys, a pediatric opthomologist, professional carpenter, company buyers, artists, psychologists and professors. This is just naming a few! What my fellow yogis do in there every day lives is just incredible and I felt so honored to be in the pot with people who are daily rocking the world upside down and then shaking it out a little more. And talk about on the move! When we began, I was the person coming from the farthest away, but before it was over- Virginia, Kentucky, another in New Hampshire and another in Connecticut! I just imagine little love dots of my fellow yogis spreading out over all of the U.S.

Then came graduation day and it was a holy day. I did not well up at the thought of my graduating, but as I watched my people scooch there way ever closer to their moment to receive their gifts with Swami, I was in awe of what we had become. Do you sit an revel in those moments that will not show up again? We sang and sang and sang Kirtan until my voice was sore and I would have sang some more if I could have held the space just a few moments longer. It was so Big and Full, I just wanted to melt into the moment and ride the bliss.

And I did….and We did. And my people who love me no matter what showed up from different places and hugged and loved and ate and shared in the joy of my fellow yogis, getting to meet each other for the first time. My beloved- the Shiva to my Shakti- gave me a beautiful gift to commemorate the moment and the bliss just kept growing.

It is so difficult to say if that kind of moment will show up again in our lives. Yet I can say it just won’t happen for any of us if we don’t take risks, if we don’t fail-even just a little, and it certainly won’t show up with out the vulnerability of connection. I carry with me so many new things, new people and young friendships. I most importantly carry with me the reocgnition that what I will share as a teacher does not come from me, but from the many who sprouted and grew along with me. When I teach my future classes, I will take with me my picture of Swami and my graduating class picture of my fellow yogis. Without you, there would be no yoga teacher in me. I look forward to (and am scared as hell) sharing in the tremendous gifts that have been shared with me. May you always see my grateful heart and the many yoga teachers that share the path with me.

One thought on “On Becoming a Yogi”