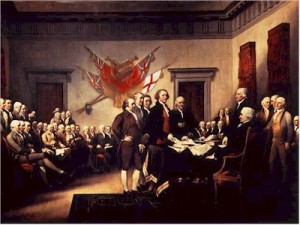 Like many Americans, our idea of the signing of the Declaration of Independence is a mass of old white men standing around in lavish clothing, likely sighing, and waiting their turn to finally sign this sweaty document that had been written and rewritten many times. The truth is each were fleeing, secretly hiding and many coming incognito to Philadelphia to sign the declaration one by one while the revolution was in full force. John Adams was incensed when he later saw the commissioned painting by John Trumball because he felt it gave off the very impression many are left with today.

Sometimes, I worry the celebration of the 4th of July perpetuates that same impression. Everything is simple. We signed a document, we are ALL free, independence belongs to each one of us and there is nothing left for us to do. Now, as a child I recall spinning my sparklers, eating Bar-B-Que and enjoying being with my family. Growing up in California fireworks were strictly forbidden so we could only watch them from the air force base. I still appreciate these simple pleasures, but I’ve grown beyond my own freedom and wondered if I only celebrate my independence, does that make me shallow? CUZ ~  just down the road my fellow neighbor sometimes does not have enough to eat and struggles to keep the lights on. Some of my neighbors cannot marry because laws have been made out of fear and hatred. Or how about the cultural phenomena that makes your head hurt like, how many women are beaten, raped and killed every day? What happened to their freedom? And how about my brown skinned brothers and sisters who would say that our independence was simply their bondage?

I ate my Bar-B-Que today. AND sour cream and onion chips, thank you (Mary Poppins intonation needed here). I am celebrating my personal freedom from the bondage of shame. I have spent most of my life enslaved to the fear of being “FOUND OUT!” As one client just joyfully said this week, “I want to march in the streets with the rest of my group saying, ‘RUINED-and HAPPY, DAMN IT!’

I hope I never loose sight of the many, many gifts I have been gifted by both circumstances and hard work. I graciously wave my American flag knowing that I can press the “Post” button and there is no one on the other side to say I cannot. May I never NEVER loose sight of what really matters to me and that is spending the rest of my life encouraging and supporting others to find their independence. May we each find our way out of whatever is enslaving us in this life, celebrate our independence and never make a hollow mockery of the struggle of our fellow human.