I am having the time of my life! You would never know it by the Ass Whoopin’ I’m taking at times.

Who says ‘ass-whoopin’ and ‘time of their life’ in the same sentence?

Some days I am certain there is seriously something wrong with me. Then I remember, I have decided to lay down my House of Armour and LIVE. OUT. LOUD. At least for today. Tomorrow may not look like this, but today I chose to stand on my values and allow myself to really be seen. I can’t believe that I’m actually saying that I’m having the time of my life to be honest with you. I am choosing to dare greatly by facilitating my first Daring Way™ group with such beautiful people. I sometimes want to scoop them all up and take them home with me to my family. Other moments, I want to run away screaming out of fear that I will never measure up because I am too young, sling around too many cuss words and listen to weird music. (I always envision myself running away in my kelly green dress with my hands flailing and of course trip because I have on three inch nude heels).

But a moment keeps grabbing my attention while processing through group session after group session (Yes, us therapy-heads can’t live with ourselves until we process the process). Someone suggested that I not reach out to someone privately in the group because the side conversation would be too time consuming. I really had to think on that. The question really became, ‘Where is MY time boundary?’ ‘What am I willing to put in?’ Interestingly enough, my reasoning for not reaching out in that moment ended up having nothing to do with my boundary issue around time, but instead, the need for the work to remain in the group. Something very important would have been lost if it took place off alone, somewhere else.

I often say that I genuinely disagree with the golden rule. “So whatever you wish that others would do to you, do also to them.” (Matthew 7:12) What my boundary is around my time, how I spend my money? Who I would consider a friend?….the list goes on and on are invariably so different from one person to the next. Who says that I am right and they are wrong? There are so many areas of gray in our lives and what may be a meaningful boundary for one person may be a violation for the next.

So where does my boundary lie around time? While I was deciding whether or not to take the time to reach out to this person privately, my mind kept going back to one thing…..

When I was in college I had befriended a group of physicists. (Don’t ask, other than I was a closet nerd and had NO idea). I had the coolest friend, following my mental work out with him as my tutor.  His name was Joe and I was the supplier of girls to his physics parties, because, well….You know. There weren’t many girls. 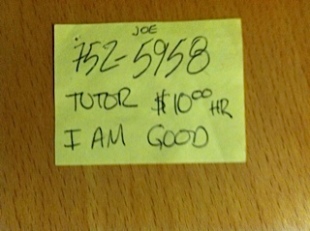 Just that year Joe got a new roommate named Donovan. He had recently lost one of his best friends in a terrible accident. His friend was hit by an 18 wheeler while changing his tire trying to make the trek to California. I had no money, certainly little time and I really did not know him but a few months. But I went to the book store, used the few bucks I had for the end of the month and bought him a sympathy card- it had some cute little sappy puppy on the front of it. I wrote in green pen (don’t ask me why I remember).

Next month Donovan and I will celebrate 17 years of being together. He says that card sparked something in him and when we spoke of it this week, he still gets a big cheesy smile on his face and mutters on about how special it was to him.

It is such a funny thing, this time boundary. I don’t want to be that person that forgets my family and friends birthdays (although I am not so good at it). I want to remember to send sympathy cards on the year anniversary after a family member passed. I want to leave love notes on your car and send kooky cat messages on sad, hard or just lonely days. I don’t want to be that perfunctory girl who just sends out the perfunctory message wishing my friends a happy fill in the blank day. I want to take the time. I want to share my piles of party crap and stay up late making sure some order gets out on time. And sometimes, when the vulnerability dial is high, I am going to take a chance, step out of my comfort zone and share myself with someone new.

you really mattered, because you do.

And No, I don’t expect the same back. The golden rule is not a fixed position.

So, I am having the time of my life….me and my ass-whoopin’ group. I keep leaning in and listening to where my boundaries work for me, listening carefully as my group dares greatly, voice their boundaries and maybe….just maybe…..We will each decide to take the time to dial up the vulnerability.

I am a licensed Marriage and Family Therapist with over 20 years in practice. I am in love with people and our peculiarities. View all posts by amgregory2013